The New York/New Jersey estuary has been a nexus of global trade for a long time.
In 1956, the SS Ideal X set sail from Port Newark, bound for Houston, Texas.

It carried the world's first 58 intermodal cargo containers.
Before the SS Ideal X, most goods had to be painstakingly packed into a ship's hold individually. There were a lot of dock workers on the waterfront, and there was a lot of corruption. It was part of the cost of doing business.
Once containerization took off, standardized intermodal shipping containers made unloading and loading a ship much faster, with specialized cranes used to move them off the ship. Containers, instead of requiring lots of dockworkers, require lots of land, where they are stacked as they wait to clear customs and before being loaded onto trucks or trains. Shipping left Manhattan and moved across the river. 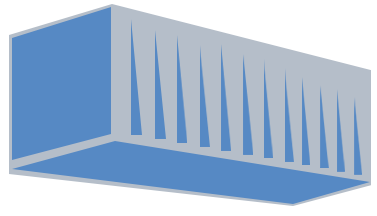 Port Newark sits at the eastern edge of a stretch of industrialized former wetlands that include the port, an airport, and a whole host of petrochemical facilities. It has plenty of space to store containers and easy access to rail lines and the turnpike. Every time newspapers write about the area, they quote a report by a former Coast Guard official who called it ‘the most dangerous two miles in America’ – a temptation for terrorists.
At a 2005 hearing before the Subcommittee on Prevention of Nuclear and Biological Attack, witnesses raised a nightmare scenario: the Poor Man's ICBM.
The theory is that you could load a shipping container with a nuclear weapon, or some other WMD, and watch it sail into somewhere like Port Newark, where it would explode while awaiting inspection.
After all, part of the great terror of September 11 was that al Qaeda had turned the civilian infrastructure against the US. Using civilian box cutters, they took control of civilian aircraft. Using skills learned at a civil aviation school, they turned those planes into tower-toppling missiles.
In the years since 9/11 there have been numerous treaties and new laws with weird names to address this threat to American lives, but the basic idea behind them is always this: tighten security.
The 2002 Container Security Initiative moved the border overseas by setting up US customs checkpoints on foreign soil. The SAFE Port Act of 2006 requires that 100% of all containers coming to America be scanned for nuclear material before they depart.
100% scanning was meant to be implemented by 2012. When the law was passed, roughly 4% of shipping container cargo was being inspected. As of today, scanning has reached… 4%. The compliance deadline has been moved to 2016. It probably won't happen then either.
Understanding why the shipping industry has basically refused to enact tighter security means viewing the problem from the perspective of the supply chain.
Geographer Deborah Cowen says that the modern shipping industry has its roots in World War Two.
WWII was an industrial war, won in large part by producing lots and lots of machines and weapons and shipping them to the right places.
When the men who oversaw the military supply chains returned to civilian life, they re-entered industry with new ideas about how to organize the mass shipment of goods, and a pre-existing infrastructure for doing it. (The SS Ideal X was a repurposed WWII cargo ship).
Manufacturing parts in one country, assembling them into finished commodities in another, and deploying them in a third requires the smooth movement of cargo around the world. Anything that slows shipping is to be avoided, and a wide range of threats must be calculated into the cost of doing business.
A nuclear bomb going off is obviously a big disruption.

But so is –
A Nazi submarine
Bad weather
Piracy
An incompetent captain
Labour action
A really long security line
This means that Port Newark is the site of two overlapping but not identical management systems. The state and the company agree that the contents should not be pilfered by unauthorized persons. (Corruption is still part of the cost of doing business.)
But the state wants to be certain there are no weapons or contraband inside the container, and the company wants the container to get to its destination unimpeded. The state is in some agreement with this because the container represents economic benefits, and at the same time pleads with the company to accept new security precautions on the grounds that a successful terrorist attack would cause some serious delays.
For the supply chain, overzealous security is a much clearer and more present danger than the Poor Man's ICBM.
Emily and Tim’s new book is The Inspection House: An Impertinent Field Guide to Modern Surveillance, a book Clay Shirkey calls “a remedy for our collective incomprehension of the panopticon” , and is available now at Coach House Books, and Amazon.