It’s a familiar story: something deemed lower class ascends the social strata and is adopted by the elite.
Before becoming a mainstay of high-end restaurants, lobster was a food of the poor;  during the colonial age it was fed to American prisoners and servants.
Less familiar are tales of descent from upper crust to obscurity.
For roughly two centuries, turtle soup featured prominently on American and British tables among those with the means to procure it. But it has not managed to regain its place in the culinary sun since falling out of fashion half a century ago.
Turtle, which is said to taste like seven distinct animals – pork, lamb, chicken, beef, shrimp, fish, and goat – and especially the soup made from it, was considered a delicacy and a signifier of social class.
According to a Washington Post article from 1880,
John Adams recorded eating turtle soup numerous times during the First Continental Congress, and it graced the menu of Lincoln’s Inaugural Luncheon in 1865. 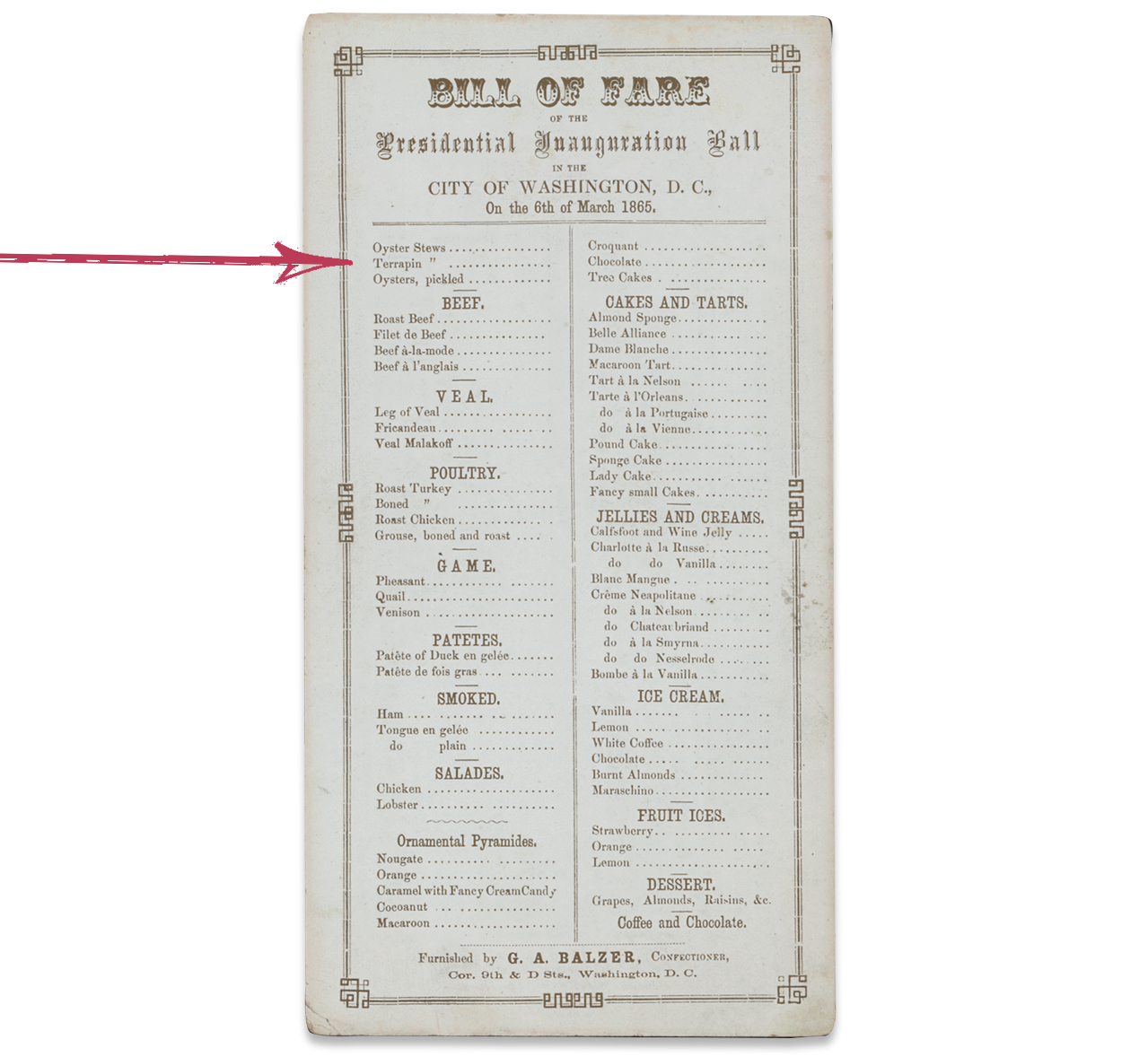 At a Fourth of July party at the White House in 1841,
John Tyler served a 300-pound turtle which he had received as a gift.
Toward the end of A Tramp Abroad, the third of Mark Twain’s travelogues, he laments the “monotonous variety of unstriking dishes” in Europe, which he describes as “fair-to-middling.”
In anticipation of his return to the U.S., he compiled a “little bill of fare” listing 80 foods emblematic of late-nineteenth-century American cuisine.
Among them was “Philadelphia Ter[r]rapin soup.”
There was even a club formed primarily for the purpose of consuming it: the Hoboken Turtle Club. Said to be the oldest social club in the U.S., the Hoboken Turtle Club’s members included Alexander Hamilton, Aaron Burr, and George Washington.
John Stevens, a lawyer, inventor, and wealthy landowner who served in Washington’s army, is credited with founding it, though Hamilton played a key role in its creation.
As the story goes, Stevens purchased a number of expensive European chickens and gave them the run of his property. After noticing that their numbers were diminishing, he hired a local shepherd’s boy to investigate. The boy camped near the water, where the chickens liked to roam. After waiting some time, he saw a large mud turtle emerge, seize a chicken, and drag it into the water.
Stevens supposedly recounted this story in 1796 in the Tontine Coffee House, then home to the New York Stock Exchange. According to an 1898 New York Times article, Stevens “swore a mighty oath” to avenge the turtles and the misfortune they had caused him. Hamilton, upon hearing this story, proclaimed, “Gad, you ought to start a turtle soup factory on your grounds, Colonel.”
And so it was, henceforth, that statesmen, authors, politicians, and other men of distinction would gather regularly, drink cocktails – often ten before breakfast – and eat throughout the day, their feast culminating in the consumption of turtle soup.
With the motto
the Hoboken Turtle Club – eventually renamed the New York Turtle Club after a change of location – remained a fixture among the elite for over a century, before fading into obscurity sometime around WWII, around the same time turtle soup itself fell out of fashion.
Preparing turtle soup is no easy feat. Most recipes put the cooking time somewhere around 30 hours, and disassembling the turtles takes a skilled hand.
President Eisenhower’s recipe gives the following instructions:

“Cut off the head from a live green turtle and drain the blood. Remove the four flappers from the turtle with a sharp knife; divide the back and belly into four parts and put the whole (without the intestines) in boiling water for about three minutes.”
This may explain why Taft hired a turtle soup chef, whose sole responsibility was to  prepare the dish. It may also explain why recipes for mock turtle soup date back as far as 1758, not long after the first recipes for the genuine article appear.
Traditionally made using a calf’s head, hooves, and tail, mock turtle soup was a popular dish in the Victorian age. Lewis Carroll, prone to poking fun at Victorian decorum, created the character of the Mock Turtle in Alice in Wonderland. With a calf’s head, hooves, and tail, and a turtle shell, the joke was that the soup was made from animal called a mock turtle.  (Cary Grant was cast in the role  [minute 42:39] in the 1933 version of the movie).
Campbells even produced a version of it, which Andy Warhol claimed was his favorite. He lamented in a 1962 interview with David Bourdon that he “must have been the only one buying it, because they discontinued it.”
Turtle soup can still be found in pockets throughout the country, notably in Louisiana and Pennsylvania. But it doesn’t appear poised to make a comeback anytime soon.
There doesn’t seem to be a single explanation for the decline in popularity of turtle soup. No doubt its extensive and time-consuming preparation was a large factor. But perhaps tastes simply changed over the years and, to most people, the thought of turtle soup now… sounds a bit gross.