Cast out from heaven,
Lucifer was sent into what Milton was the first to capitalize as “Space.”

Not the earthly realm of architects, but its
opposite: “the space between worlds,” home to gods and their powerful cohort.

In the twentieth century, “Space” acquired a further, related definition. From rocketry to medicine, it became delineated, precisely, as the realm we can only enter with the help of technology.
And so here, a quarter-million miles from the surface of the earth, amongst the gods and angels of our own history, we contemplate one of the most essential questions of our own age: the relationship between nature and technology, and the complex encounter of these forces around our own bodies.

Others have trodden before us. In his introduction to The Pentagon of Power, critic and scholar Lewis Mumford depicts astronaut Gus Grissom inside his Project Mercury capsule, likening him to a powerless embryo in the embrace of industry, technology, and the dehumanizing forces of the modern world.

In reality, a different story emerges. But not too far removed.
The pressurized tower of steel, liquid oxygen, kerosene, and fire on which Grissom and his Mercury brethren ascended to the heavens was at the time the most complex thing ever made. It had not been intended to lift people, however, but rather to kill them.
The Atlas rockets which lifted most of the men of Project Mercury, like the Titan rockets of Project Gemini, were repurposed intercontinental ballistic missiles, and the cold war of the space race was a tacit substitute for the thermonuclear war they had originally been designed to wage.
“Bernard Schriever, a brigadier general and onetime aspiring architect, was midwife to the birth of what came to be called ‘systems engineering.’ At the time, the word ‘system’ was so uncommon that a memo explaining the strategy to the joint chiefs of staff included an extended definition of the word: "like the solar system," it offered, “or "the New York Central [Railroad] system”
At its core, systems engineering dissolved the object of the missile into a web of informational relationships between the manifold contractors, academics, and military commanders, specifying and enumerating relationships of control - cybernetic links - between potentially interfering parts.
This shift had many consequences. An arms race, as the continual upgrades inherent to the system metastasized into a lethal orgy of destructive possibility. A chastened president, who, after commanding its creation, warned in his last public speech against the ‘unwarranted influence’ of what he originally termed the "military-industrial-academic complex." Yet today we might most usefully attend to a different story– how the human body, a sine qua non of the space race, entered into this systematic landscape of destruction
Against the sudden apparent mastery of systems engineering, it was supposed first that the body itself would quickly succumb. A new word, ‘cyborg,’ was coined for an Air Force conference. Millions were spent on a conception of the body - components, signals, synchronization - that brooked no boundary between man and the chemical and mechanical means by which he might better occupy the quickly arriving future.
But after Yuri Gagarin’s audacious orbit of 1961
– which amounted to a decade-long sprint to the moon – such plans were superseded by new,
equally sharp concepts:
It was assumed the need would be for rigid, masculine, mechanical environments, made by military suppliers. Yet — as is often the case — the eventual reality was far more interesting.

For this to come to pass, of course, more masculine, military-industrial alternatives had to fail, and be replaced by a different kind of integration.
Not so much between body and machine, as between the traditional expertise of fashion and the new regulations of systems engineering. Let two examples serve; 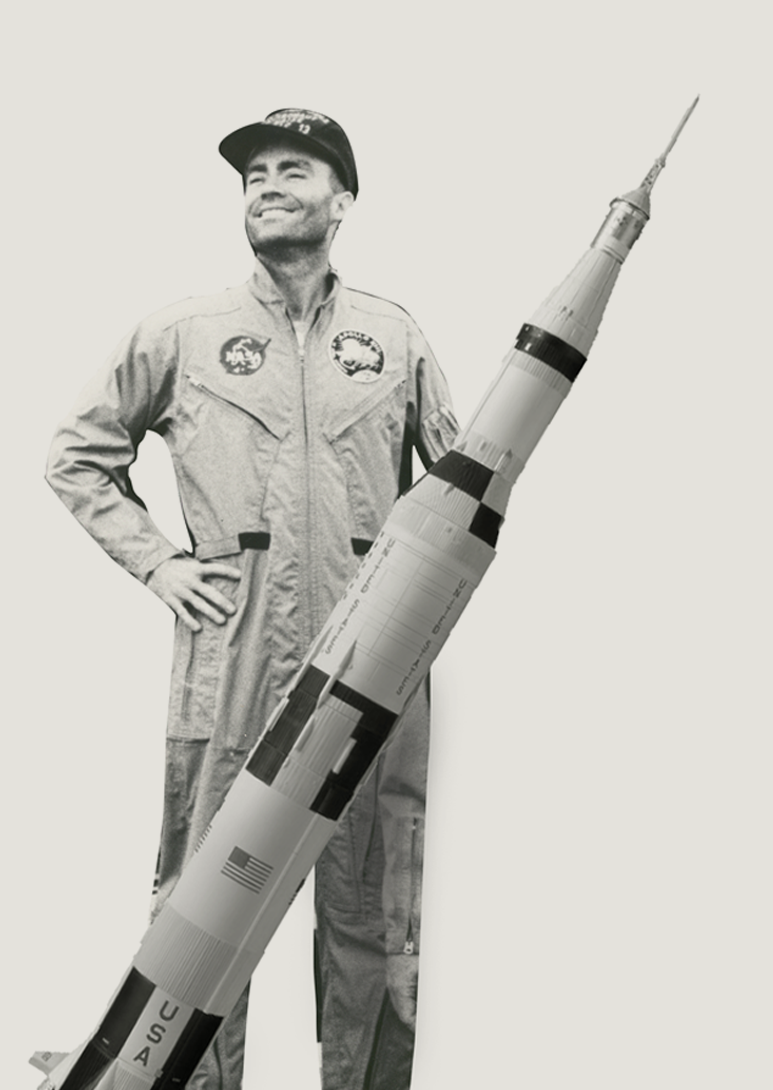 First, instead of being sequentially serialized on each modification - in accordance with the system-engineering standard - each part of the suit, custom-fitted to each astronaut, was sized as small, medium, and large, like clothing.

After an incident with the first astronaut fitted, the urine-collection device was sized large, extra large, and extra-extra large.
The second example is more subtle, but essential. When it was pointed out in one of many battles about paperwork that ILC was obliged to supply NASA with drawings of the suit design, the company responded that none were used in the making of the suit; there were only the patterns and procedures of the seamstress. NASA insisted, and so drawings were produced – but only as the result of a delineated dissection.
They are not then, as the usual media of design instruments of inspiration and instruction, that cause things to be made. They do not predict simplicity, but rather perceive complexity. In this, they share essential qualities with maps of landscapes and cities.
And this is a down-to earth point. What we discover in the heavens is that the logic of technology, whose mediation of our own entrance into capitalized Space defines its boundaries even as it makes us like the gods of old, tends to collapse at the boundaries of our bodies.
And when we examine that intimate edge, a quarter-million miles from earth, we discover not an integrated system of cybernetic control, but rather its opposite; a buffer and boundary that shares as many qualities, from its adaptive origins to its epidermal structure, with the body it protects, as well as with the military-industrial super-system to which it is also, of course, a party.
In 1968, Buckminster Fuller declared us all passengers on "Spaceship Earth." And we must indeed understand our world as similar to a spaceship; as in any closed system, we cannot escape the consequences of our own actions. Today, of course, we are as gods, altering the world in our own image. But equally we must recognize that the robust complexity that characterizes our own body, our cities, and our planet will byits very nature subvert any attempt at diagramming or manipulating our environments with the precision of a spaceship’s knob or dials. JA

It is this lesson, above all, that suits the story of our own time.
Nicholas De Monchaux is the author of Spacesuit: Fashioning Apollo