Consider the San Francisco Bay – an enormous estuary, with ocean water flowing in through the Golden Gate, and fresh water coming in from the San Joaquin, Sacramento, and Napa rivers.
The bay, by its very definition, is protected from the insults of the open ocean. It is home to a rich ecosystem, though one that is hardly protected from the insults of mankind.
The shipping industry in the bay is robust – the Port of Oakland is a huge regional hub that sees even more action than the Port of San Francisco.
There’s also a military presence – In both World Wars the Bay Area was a strategic location, fiercely protected.
Now imagine if none of this were the case. Imagine a San Francisco Bay that is only 40 percent of its current size, truncated to the north and south by dams and in-filled on the east side of the bay, so much so that Oakland, Berkeley, and Richmond would be unrecognizable today, and a great deal larger.

If the Reber plan had succeeded, that’s exactly what it would look like today.
Grand American public works projects were having their day: the paint was still drying on the locks of the Panama Canal, the Hoover Dam was well on its way to fulfilling the promise of cheap energy, the two headliner bridges of the San Francisco Bay Area would open in 1936 and ‘37, and the Hetch Hetchy Project was about to deliver fresh water from Yosemite Valley to people all over the Bay Area.
During the next few years, as Reber shopped his plan around to anyone who would listen, he gained support from influential figures and organizations, notably the recently un-presidented Herbert Hoover and San Francisco’s then-paper of record, the Chronicle. 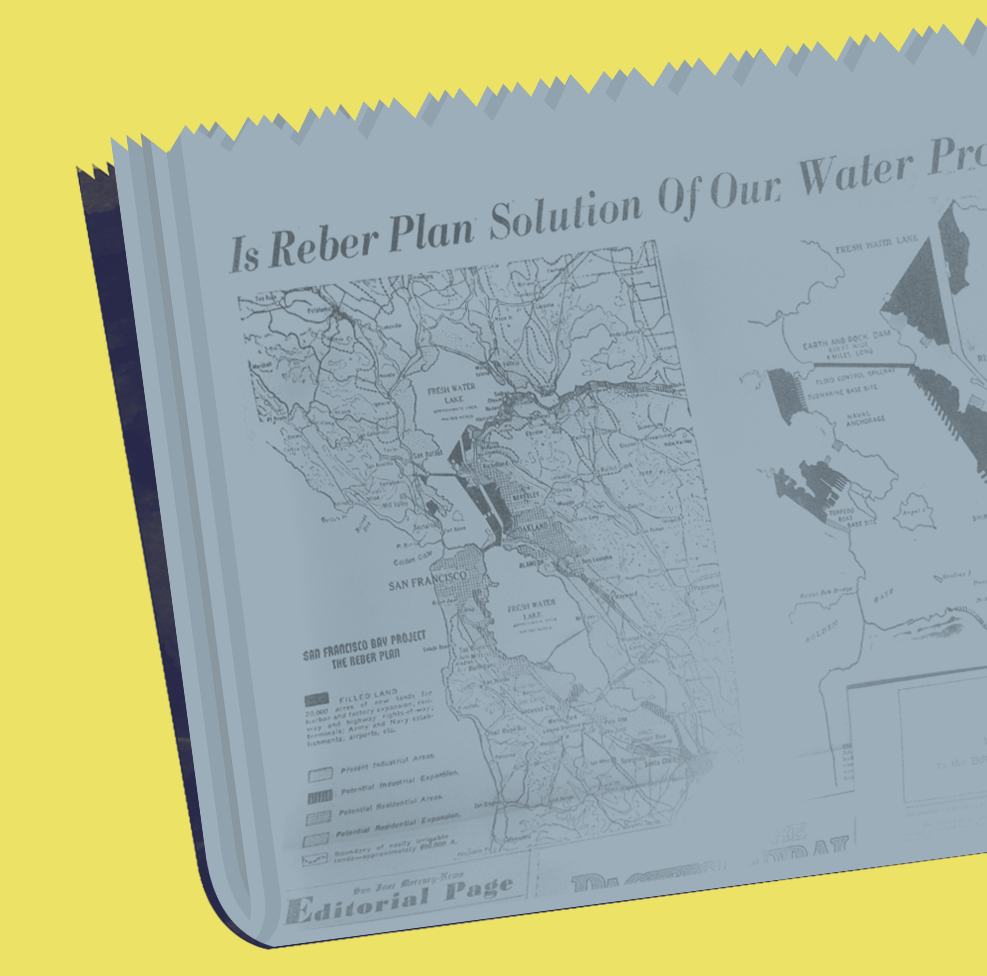 As New Deal projects proliferated, so too did Reber’s hopes of getting enough momentum behind his plan to make it a reality.
None of these arguments mattered to those who saw what the plan threatened: a natural ecosystem and thriving ports in Oakland and Stockton. Oakland representatives were especially critical of the plan, suggesting that the city of San Francisco was promoting it in order to maintain the hierarchal status quo between the two cities, since the Port of Oakland would be isolated behind a lock if Reber was successful.
Many who promoted the plan had vested interests, while others sought in an altered Earth the proof that they could alter it.

The Reber plan had been romanticized for so long by so many that it demanded rigorous review.

Experts agreed that it could be done. But should it be done?

In 1957 The US Army Corps of Engineers began construction of a model of the entire bay in an old hangar in Sausalito to evaluate the proposal.
John Reber died in 1960, the same year that tests began on the completed model.
As researchers flowed scaled-down tides and waves into their model bay they saw plan-killers in miniature.

Ecosystems would be disturbed and destroyed.
We often see nature fighting encroachment by humans. In this case it’s refreshing to know that people fought back so that nature didn’t have to.